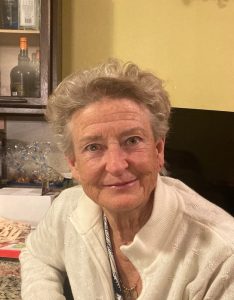 Friday the 13th of June 1969, Paul Hage and Deborah got married.  She had just turned 20. Many couples believe their marriage is remarkable.  This one was also remarkable until Paul’s sudden death Nov 7, 2017.  It was remarkable because they raised nine children and fostered numerous others.

Prior to getting married they had talked about what size family they wanted and had decided on 4 children.  Two boys, two girls.  Two would enter the family by birth and two would enter via adoption. This decision put the two of them on a path of seeing all of the world’s children as their own.  A path that lasted all of their lives.

After marrying in 1969, Deborah completed her undergraduate degree in secondary education with a major in speech, English and theatre. While still in school she was hired as an English teacher at Denver Lutheran High School.  As the drama coach she directed the students in Job, a dramatization of the Biblical story of God dropping destruction on Job, trusting Job will handle all of the tragedy landing in his life.  Spending weeks with students struggling to make sense of an irrational world reinforced her view that sometimes it is not anyone’s fault when things go wrong.  Anger does not help.  Make the best of it and move on. Even at 20 she understood that when dealing with students she needed to look at what was driving negative behavior in the classroom, not at the behavior itself.  While child development was not addressed in any great detail as part of her degree program she knew intuitively that, even though she was still practically a child herself, teaching 18 years olds at age 20, humor and kindness went a great deal further with problem behavior then discipline.  The calmer she remained, the calmer the situation became.

Deborah Hage stopped teaching and became a full-time mom with the birth of their first child.  Following the example of their parents, Paul and Deborah covered the baby with love and attention.  They did not need to be taught that constant eye contact, touch, smiles, food, and vocalizations were essential to their daughter’s well being.  They were lavish with their love, and she was joyous, sweet and contented.  Wanting the first two children to be close in age, they quickly adopted a 9-month old boy from Peru.  Deborah traveled to bring him home.  She was appalled at how poorly developed his legs were.  His diaper sores.  How exhausted he was from latching his arms over the side of his tiny crib, lifting himself up to look around, then dropping back down.  How inattentive the caregivers were to this baby with a large birthmark on his forehead.

Getting home, the two toddlers could not have been more different in temperament.  The little boy screamed and screamed and screamed.  Huge fits of temper.  Refused to be cuddled.  Threw his food.  Smeared feces scooped out of his diaper.  Daddy would return home and suddenly a different little boy emerged, sweet, smiles, running to Paul to be grabbed up and swung around.  Every day the pattern was the same.  Paul could not understand that two little boys were existing in one body.  He began to doubt Deborah, questioned whether she was capable of loving him.

It quickly became apparent the two children saw the world through radically different eyes.  One saw the world with openness and trust.  The other greeted the world every day with fear and misgivings.  Deborah started reading about adoptions and the novel concept, at the time, of “attachment disorder.”

Another pregnancy, another little boy.  In demeanor and personality much like the first little girl.  Another adoption from Peru.  When Deborah went to the orphanage it was clear the 9 month old girl was having a completely different infant experience then her son adopted from the same orphanage.  She was beautiful, always held.  The children would get home from school and rush to the nursery to play with her.  She slept with the night nurse.  She was taken down to the dining room for meals.  Lovingly bathed and dressed.  Upon arriving home she settled in with joy and contentment.  It was several years before Deborah figured out the personality difference in the two children from Peru was due to those first 9 months of care…..or lack of it.  Click here to read more about that time in our newsletter Christmas 1973 – 1984

Deborah began researching adoptees and found information on what was then called “Attachment disorder.”  Parenting was adapted to accommodate the behavioral and emotional quirks.  Life settled down slightly, enough for Paul and Deborah to realize they wanted to adopt again.  Two boys from Texas.  Five and six years old.  Undiagnosed with, what was then called, “Fetal Alcohol Syndrome”.  Another leap in parenting skills required.  Life was good.  More reading.  More research.  More development of parenting skills.

A sibling group with a history of abuse and neglect, ages 4, 6 and 8, were adopted.  Learning the special parenting needs of the three children was a hard slog.  Therapists were engaged as they acted out their rage and fear.  The children became adolescents, each stage of their development requiring new learning for the parents.  Deborah and Paul became involved in a foster care agency which specialized in children with disordered attachments,  embracing the needs of severely emotionally and behaviorally children. The therapy and parent coaching involved in working with the foster children was applied to the rest of the children to great effect.  Click here to read more about that time in our Click here to read more about that time in our newsletter Christmas 1985.

More reading on how to parent older adopted children.  More research was pursued on the effects of abuse and neglect in personality development.  More workshops were attended. Most of the children who came into their family by way of adoption and foster care had been subjected to abuse and/or neglect to varying degrees. Additionally, most were physically, emotionally, behaviorally and/or intellectually challenged. Some suffered from Fetal Alcohol Syndrome, educational and legal issues.  All of these factors affected their behavioral and emotional states.  At one point in time 8 of the children were teenagers at once! They went through the throes of emancipation; with several seeking out and finding birth parents and others finding that the surest way to leave home was to go to jail.  The result of the brain trauma was often behavioral and emotional instability, rejection of authority, sometimes bordering on violent, a danger to themselves and others.   Click here to read more about that time in our newsletter Christmas 1986, 1987, …2016

Healing the children was the family goal.  Attending workshops, working with therapists and other families to develop effective paths to healing was a life long search. Initially the trend was to diagnose the children with an attachment disorder.  However, the more Deborah researched and studied the more she realized that a disordered attachment was the result, not the cause of, early childhood trauma.  The more she researched brain function the more she realized that in order to heal the children she needed to heal the brain.  Realizing that appropriate and effective therapists were difficult to find Deborah returned to school for a Master’s Degree in Social Work.