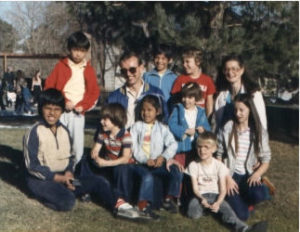 Well, here it is, another late Christmas card! We are not really trying to take a prize for tardiness but this sure must rank first among the competition. I know that you get tired of lame excuses of being busy and overwhelmed, schedules too full with trips to the Bahamas, etc. but I am going to bore you with another one anyway. The truth of the matter is that our family responsibilities in the last couple months have increased by 50%. Instead of “only” 6 children, now we “only” have 9. Actually, we could have sent out our usual picture in early December but decided there was no point in having a card that was outdated by the time it arrived. So, we decided to hold off until the kids arrived and we could get a group shot. Enclosed you will find the new us – a three Burger King-Table family.

Jesse, 6 1/2, on Paul’s right knee, is the middle child in the sibling group which now calls us Mom and Dad. He is in the first grade, loves adventure tapes played at full blast, being late for school and losing mittens. He is a most interesting little fellow whose progress you can follow through life if you continue to include us among your friends. (Of course, the price of friendship includes having us all over to dinner at least once a year.)

Amber, 4 1/2, standing between Paul and me (the baby displacing Rachel in that role) is a charmer who thinks that the ticket to success in life is having a winning smile. So far she has managed to save her skin several times by simply turning up the corners of her mouth. Her skin becomes endangered often because she has appointed herself my assistant. I think she is a little short for the job but that doesn’t stop her from giving me an up-to-the-minute report on who is doing what to whom where. If I want to know who forgot to brush their teeth I need only ask.

Jamie, 8 1/2, standing next to me, is the hard worker of the bunch. He is sensitive and really trying to smooth over the transition from his foster home to here. He is almost too good to be true. We are waiting for him to realize that he is our son because he is our son, not because he has earned the gold medal for exemplary behavior.

Rebecca, 12, is now in the sixth grade and practicing being a teenager. I try to think of important things to talk to her about to keep my mind off the purple and white striped fingernail polish she is wearing on alternating fingers. Jonathan, 11, keeps us all on an emotional roller coaster by managing to be obnoxious just often enough so that we don’t take it for granted when he is nice. Matthew, 9 1/2, is a third grader who has taken leave of earth and wishes we would stop bothering him with such useless things as times tables when there are day dreams to dream and Legos to build. We are hoping for a job to open up for him that requires intelligence and wit but no work. Ruben, 9, on the other hand, works very hard and we can safely predict that on his tombstone it will say, “I’ve already done my share!” Robert, 8, goes into withdrawal 10 feet away from a refrigerator but still needs elastic in the back of 6 slims to keep his jeans up. If there is ever a shortage of peanut butter you can start to send flowers. Rachel, 7, surprises everyone with how tough she is, particularly on the soccer field. They think that since she is so cute she must just be fluff. They don’t know what stamina is built into you by living in this house.

Paul, 38, has lowered his goals in life to a clean shirt in the morning and dinner sometime before bedtime. He considers the week a success when the toilet doesn’t overflow. I also have modest expectations and look to the day when there is still hot water at the end of it.

1985 was a good year for us. We spent several weeks in Yellowstone and the Tetons glorying in the sights, hiking and boating. We have some great family photos but, like I said, they are out of date. We played a lot of soccer, hiked up and down the incomparable terrain outside our door and have done a lot of cross-country skiing, especially since the children get out of school one afternoon a week for 8 weeks for lessons.

A side light of the summer was our entry in the Silverthorne Saturday Parade. Paul and I were clothesline poles with the children strung up as laundry between us with the slogan, “Hung Up On Silverthorne”. For our efforts we were awarded the “Best Overall Entry” Traveling Trophy. The trophy stands about 2 feet tall and 3 feet long and is designed to be placed in a business’s trophy case. Now we are hard pressed to come up with an entry for this year to equal last year’s. So, if any of you can think of something 11 people of various sizes can enter in a parade, let us know. Your prize with be that you can be our friend without having us over for dinner!

We continue to enjoy Silverthorne and all of the opportunities we have here. If you are ever in the neighborhood just walk in and sit down at the table for dinner. We probably won’t notice you’re here unless you ask to have your meat cut or you spill your milk.

Happy Valentine’s Day,
We hope your life is as full of love as ours is.