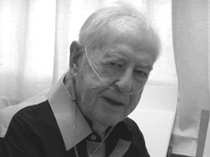 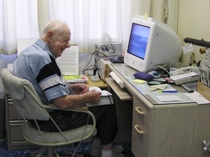 This really isn’t a Christmas letter at all. Christmas is long past, passed by as a blurred aftermath to my father’s death. Dad died December 16, unsurprisingly due to his failing health, in my mother’s and my arms. We sang and prayed him into the kingdom as his pulse slowed and his breath stopped. It was one of those amazing events, incomprehensible in its beauty and simplicity. The funeral was the 23 rd and I sort of recall handing the kids checks and telling them to get themselves something for Christmas. Because the kids had come home for the funeral Paul and I spent Christmas serenely contemplating that it is OK for the season to pass with few presents, no tree, no decorations, no company. Different…but OK. We wouldn’t want it as a steady diet, but it suited us perfectly this last year.

That said, it is still worth noting the events of 2003. If for no other reason than to remember the year as having more substance to it then Dad’s dying. After all, the living kept on living and it is for them that this letter is written.

Paul retired July 1 after 35 years with the same company. It called itself by a different name every year and he had a different job title every year, but essentially it was the same utility company it had always been. He had committed to taking several months off before finding some sort of part time job. He was going to do all of the things that hadn’t been done around the house over the last several years due to job pressures. That commitment lasted until after we returned from a two week RV trip to Canada. We hiked through the glorious Canadian Rockies, drove home and the next day he had a job! He is now head of the paint department for two stores owned by some friends from church. Paul, who couldn’t have differentiated between blue and green with any certainty, is now looking at all the Christmas pictures we have received and saying, “Oh, looks like the Smith’s painted the trim on their new home Colonial Rust.” Obviously he would rather work for the Sather’s then he would for me!

My job as director of MAPS Colorado is coming to a slow close. For a variety of reasons MAPS and I decided it was time to close the Colorado office. It has been a good run and we have placed a wonderful number of children. We have much to be proud of, but it is time to move on. I have also turned over the publishing and distribution of my small books to another company. Less profitable for me, but also a great reduction in work. Still keeping busy with my private therapy practice and lectures.

Rebecca is engaged to be married to Pedro Espina, a fellow engineer in the Washington D.C area. Jonathan has changed his name to Alejandro, still flies for Frontier. Matthew is a pilot in North Carolina, flying a Cessna Caravan on a feeder route for UPS. Rachel and Kellie are one year closer to completion of their doctorates. Only one year left! Ruben and his wonderful girlfriend Alexis are expecting a little girl in July. (In one of those odd twists, they cannot get married until after the baby is a year old as that is how long Medicaid for mother and baby will last. Neither of them have insurance and if they get married they will lose their Medicaid benefits and they can’t afford the doctor and hospital bills on their own. I don’t think that this is what Bush was thinking of when he sponsored the marriage initiatives.)

Robert is working in Las Vegas. Jamie is expecting to be paroled this spring sometime. Jesse has cut a CD and is a professional musician, working odd jobs on the side, until he makes it into the limelight. Amber is clerking at a beauty products store in Denver. Brandon and his girlfriend have two wonderful children and he continues to amaze me with what wonderful father and hard worker he is. Another one of our former foster children, Alex, is paroling to our home in April. He hopes to attend school and work. If all goes well we will have none of our Hagelets in prison for the first time in 8 ½ years!

Here’s to all of us breaking out of our prisons, loosing the chains that bind us, freeing us to move out in love!