Dear Friends and Loved Ones,

Hage family photo at Rachel and Kelly’s commitment ceremony, 2001Thoughts of personal highs and international woes bring the year to a somber conclusion. With the United States collectively suffering from Post Traumatic Stress Disorder it is hard to focus on a baby in a manger who came to bless the world with the presence of God. Yet, blessings abound.

Rebecca is blessed with a job that pays her enough so she can devote herself to what she truly enjoys -time with family and friends, athletic endeavors and travel. She has upped the athletic ante this year to triathlon competitions. We are going to India and Nepal for most of January to attend the wedding of the son of a friend of mine, visit a few orphanages (my ideas) and trek around the base of Everest (Rebecca’s idea).

Jonathan continues to be blessed by his job at Frontier as a flight attendant. Though his job is considerably more difficult now then it was, the rewards from an appreciative public are greater. Frightened and upset by events, after a bit of uncertainty, his servant’s heart was back flying.

Matthew graduated from flight school with honors despite the fact he is one of the rare few that has crashed landed a plane during training. He is now soaring high with his job teaching flying. He is learning to use a crock-pot and clean up after himself. That is not only a blessing to him but also a blessing to the world.

Rachel and Kellie experience daily the blessing of their relationship with each other. After legally changing their last name they solemnized their love for each other in a commitment ceremony on June 6, a highlight of the year for all of us who were able to attend. With seven sons who would have thought the best woman brought home so far would be one brought home by our daughter!

Ruben is blessed with a stable job as a cook in a local restaurant and this year moved into a condo that Paul and I helped him buy. He recently bought a puppy and has repeatedly said having a dog is as expensive as having a girl friend but the relationship is hugely easier to manage.

Robert is blessed with health and safety. He was out of prison for 33 days at the first of the year, breaking his previous record of 31 days. His publicly sponsored and paid for residential treatment program is due to release him January 2003. At that time he will get another opportunity to practice the steps to responsibility. To his enormous credit he has had no disciplinary actions against him this year! He has learned that while prison is no picnic being in the “hole” (solitary confinement) is even worse. 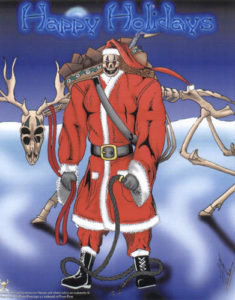 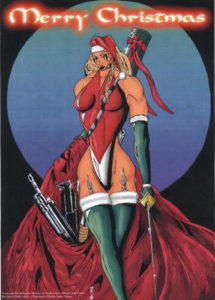 Jamie continues his progress to less and less restrictive settings and will be blessed in six months with a move from the prison to a community based facility where he will be able to get some real work experiences to supplement his years of behind the bars training as a computer graphic artist. If anyone looked at his bizarre art (for mature audiences only) they would reconsider his release! (A vixen elf packing heat as a Christmas card?and Santa)

Jesse, still sleeping on the sofa in his birth mother’s home, knows what he has to do to get his life back on track, but is unable to find the wherewithal to do it. He is a true believer in God – trusting that without working manna will fall from heaven. (The tricky part is to make car payments and buy food with manna.) He still visits his daughter Dominique, now 3, regularly, but none of us know where his son Damien, 2 ½, is as that mother has left with no forwarding address.

Amber, who lives with her birth-mother along with Jesse, came home for Thanksgiving this year, after many years of absence. It was a welcome change from contact only when she crashes her car or breaks her foot. She graduates from massage therapy school in January and is slowly coming to the realization that she is now expected to support herself.

Alex only lived with us for 7 months in 1995 but he calls every week and throughout his ups and downs makes me laugh. Brandon is a great father to one-year-old Katerina and his strengths and abilities outshine anything we ever thought he was capable of. They are both blessings to me. Every time they call I am reminded, “No act of love is ever wasted.”

My lecturing is going well – I am even my own dot.com (www.deborahhage.com)! I was in Phoenix when the towers were hit and had 48 hours to get to San Francisco without the benefit of flight. 45 of my closest friends and I spent all night on a Greyhound Bus. Pillows are not provided so I bought a stuffed animal at the first stop and gave it to a fellow traveler when I disembarked. The writing, private practice and adoption/therapeutic foster care agency are also going well. A group of parents and therapists in Phoenix have approached me to open a similar agency there so that is a next project. The work load has expanded to the point where I have 9 people working for me in one capacity or another. I spent 9 days in an orphanage in Guatemala this fall – blessings abounded every day I was able to sit there and hold the babies! I don’t know how to meet a lot of needs, but a crying baby I understand.

Only a year after the merger that created Xcel Energy and a new job assignment that required Paul to office in Denver, another re-organization and another new job now has him as Director of Sub-station Maintenance. (He has never worked in a substation and now he heads the department…go figure.) With service territory in parts of 12 states he continues to live at our condo in Denver, traveling to Texas and Minnesota every few weeks. (Paul says, “Merry Christmas, Y’all, You betcha!) When the towers were hit he was in the air. His flight was diverted to Rapid City where he and 6 of his closest friends rented a car to return to Denver. He comes home on the weekend to find a message from me that I am in New York and will see him Sunday afternoon. We are managing our long distance relationship but are looking forward to his retirement. I suppose I could retire and travel more to be where he is… Naaahhh.

Being in relationship with God means being in relationship with others…all others…those we like, those we don’t, those who are like us, those who are not, those we have hurt, those who have hurt us. Several years ago I was in one of my contemplation-of-my-mortality phases and decided that if I were to die that day I wanted to die knowing my children and I had no regrets, no unfinished business between us. I approached each individually and told them I had done my best to be a good mother but I knew I had made mistakes. I wanted to give them an opportunity to tell me what they were angry or hurt about concerning what I had done or failed to do so I could apologize. I explained I did not want them to look at my grave and think about how I had hurt them. I wanted them to look at my grave and know how much I loved them, as badly as I had sometimes shown it, I loved them. It took me months to find the best opportunity to do this with each child, but it was worth it. Some of them shared with me stories of incredible pain that I had been oblivious to or had ignored thinking it wasn’t important. We laughed, we cried. It was important! Now, as I count among my blessings the wonderful relationship I have with each and every one of my children, I am glad I do not have to rely on the remote possibility that at the point of death I will have access to a cell phone to clean up the business of what we mean to each other. Our relationship with each other is secure, now and for all eternity.

That is the blessing Christ brought to the earth at Christmas the knowledge that our relationship with God is secure, now and for all eternity.