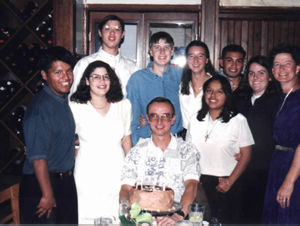 Paul and I have concluded that the “empty nest syndrome” is a myth. There are only five people living in our home right now and it feels good…very good. Everyone seems to have found a niche for themselves and has chosen a level of independence which feels right for them. Some are in jail, with no independence at all, others are out on their own and dependent on themselves, others range somewhere in between. Paul and I cheer them on from the sidelines.

Rebecca, 24 ½ (middle, back) is a rocket scientist in the Baltimore area, working to support her new car and becoming accustomed to a daily 8 – 5 job. She got her BS in Aerospace Engineering this spring, joining her dad and granddad with engineering degrees from CU. The party animal still emerges on the weekend. God is with her.

Jonathan, 23 ½ (left, front) is going to school and working, while keeping our home fires burning. His dream of becoming a flight attendant continues to be thwarted. The airline interview process is not revealing to them his efficient work habits, his joy, and his servant’s heart. Their loss. God is here.

Matthew, 21 ½ (left of Reb) is living at home, driving a bus, volunteering for Search and Rescue and going to school, having missed out on an opportunity to work as a detention deputy in the jail because he took a one time hit of marijuana 1 ½ years ago. Funny how present choices open or close doors in the future. His goal is still to work in law enforcement. God is with him, his passengers on the road and those he saves in the mountains.

Ruben, 21 (right of Reb) is finding that being on his own in Tucson is very hard work and more expensive than he ever dreamed. He left our resort community, where he could pick and choose between numerous jobs and get paid $9 an hour to fill doughnut boxes, for Tucson, where labor is cheap and employment hard to come by. It took him almost 6 weeks to find a job as a janitor in a hospital. God is in Tucson.

The year did not take long to pick up speed. By January 6, James, 20 ½ had a severe reaction to the stress of the holidays and, with a couple of other kids, kidnapped a man at knife point and stole his car. After the dust settled he ended up sentenced to 16 years in prison. The earliest he could be released is 2002. To some, James violent behavior might indicate that living with us had no positive effect on him. However, rather than looking at his prison sentence for kidnapping as a failure I choose to look at it as a success ….. because he is not in prison for murder. No act of love is ever wasted. The love Paul and I gave him may not have been enough for him to avoid kidnapping the man, but it was enough to keep him from killing him. Success for some people is measured differently than for others. God is with him. He may do greater work for the glory of God inside the walls than he did outside them.

It is just as well that Matthew did not get the job in the jail as he would then be on one side of the bars looking in while Robert, 20, was on the inside looking out. Robert is having increasing difficulty keeping his anger and addictions in check – the continuing tragic side effect of his Fetal Alcohol Syndrome. God is with him.

Rachel, 19 ½ (right of Paul) is about to graduate from Adams State College with numerous honors in the sociology and psychology departments to her credit. With three brothers in legal detention she has found a great sympathy for prisoners and, with her partner Kellie (right of Ruben), campaigns against the death penalty. God is with them as they pursue their master’s degrees next and then doctorates.

Jesse, 18 ½, is in a detention program in Denver for breaking and entering a local business. Fortunately, he acted before he turned 18 and so his sentence was light. He is doing well and is moving toward release in the spring. God is with him.

Amber, 16 ½ (left of Paul) remains living with her birth mother. This situation, which could have ended up with so much heartbreak, has turned into a blessing. She is very happy, doing well in school and we talk to each other almost every week and see each other a couple of times a month. God is with her and her relationship with both her mothers.

Corey, 16 ½ (left, back) continues to mature at a very slow pace but every so often progress is noted. McDonald’s policy of hiring the less apt as a community service is a gift to us all. God is with him as he grows up and we begin the process of looking for an adult, long term living arrangement for him.

Paul (The dude with the cake!) turned 50 “ain’t that nifty” this year. He runs or swims each weekday morning at the rec center next door, and did “Ride the Rockies” for the 5th time (7 days, 418 miles bicycling through the mountains of Colorado). So far he has survived the mergers, downsizings and changes occurring in the utility industry these days. God is at play and at work.

I continue in private practice as an attachment therapist and have opened up an adoption agency. I still believe in adoption and am going to India and Nepal to tour orphanages. It is exciting work to become involved in. God is with us and all families who choose this route to build a family.

Emmanuel – God with us! Peace and Joy this season as we join you in celebrating the entrance into our lives of our ever living, ever loving, ever present God.

For I am persuaded that neither death, nor life, nor angels, nor principalities, nor things present, nor things to come, nor powers, nor height, nor depth, nor gay, nor straight, nor retardation, nor kidnapping, nor stealing, nor addictions, nor alienation from family, nor homelessness, nor joblessness, nor anything in all creation can separate us from the love of God.

Blessings and Peace,
Paul and Deborah