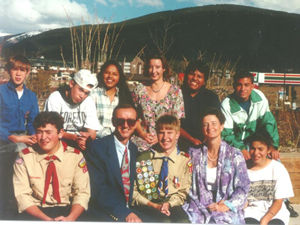 To All The Saints,

Merry, merry Christmas to all people everywhere! We peaked in “merriness” the month of July when eleven kids were home. Ten of them were teenagers at once so we surpassed our previous record of eight. Though to tell the truth by the time the numbers look like that two more, or less, doesn’t make much of a difference. Now, however, we are looking at 1995 and seeing a whole new world ‘s record to break – the number of people in college at one time will be 5!

Rebecca has transferred out the bulk of her belongings, including Keesha, the amazing rabbit who comes when he is called (We have kids who haven’t mastered that skill!) Her dual major at C.U. is Aerospace Engineering and party animal.

In January Jon will leave for the University of Colorado. He has spent the past year again cooking, shopping, running errands. This was in addition to working and playing flute and piccolo in the Front Range Orchestra in Denver. I have loved having a “nanny” but, at age 20, it is time for him to spread his wings and fly.

Matthew will graduate in June, is going to Europe for a summer of free-form travel and will leave home for college in September. When he (read that “we”) obtained the rank of Eagle Scout it was the high point of my year.

Ruben had a great year of soccer and has decided to fall in love. In order to pay for this expensive endeavor he has gotten a job as a cook’s assistant. His slender looks belie his appetite. The restaurant might lose money by having him in the kitchen.

Last July James completed his one year’s probation for some felony thievery and left for Job Corps in western Colorado. He is going to high school and working on a trade apprenticeship there. He is in love with life and has discovered you appreciate what you have more when you pay for it – what a switch!

Job Corps, however, was not the answer for Robert. He is now a masonry apprentice to a man who is as much big brother to him as boss! I live in fear that Robert will get tangled up in the pants he “low-rides” (the style where the crotch hangs between the knees), fall off the ladder with a bucket of mud and end up on workmen’s comp.!

Rachel is graduating a year early in order to attend Adam’s State College, with a one month side trip with Rebecca to Peru first. This is the girl who wouldn’t leave the hotel room in Quebec and she is going to rub shoulders with the Shining Path?!?

Jesse returned home in July after a year in El Pueblo Boy’s Ranch. However, his idea of what constituted reasonable rules and behavior and our ideas didn’t match up so he is back in the custody of the county. Wishes and prayers weren’t enough for us to hang on to him. Maybe his first wife can do better.

The Summit County Christian School is helping the rose we call Amber to blossom into quite a beauty. She is such a gentle spirit that it is hard to see how she has emerged from this environment! To say nothing of the room she emerges from each morning! If the Department of Health ever inspected she would be evicted..

Corey, our foster son for 3 1/2 years, is going home in March, still 6 years old in a 13 year old body, but precious nonetheless. If his parents weren’t absolutely wonderful I would not be able to tolerate the hole his absence will leave in my heart. Fortunately, we are working with another foster son, 15 1/2 yr. old David, currently at El Pueblo Boy’s Ranch, who we are hoping will get over his habit of stealing our cars and be able to return here later in the year .

By September of 1995 only Ruben, Robert and Amber will still be living full- time at home! When we don’t have to deal with stolen cars, wrecked cars, sons sneaking their girlfriends into their bedroom at night, court appearances for legal infractions, school appearances for slumping grades, being hit/bit, Alanon meetings (0ne of the kids is court ordered to attend AA), police, therapists, doctors, the district attorney, probation officers and lawyers – whatever will we do with our time? How does the rest of the world live without the constant adrenalin pump? Our fear is that we will fall asleep in the middle of the day out of sheer boredom! Nah…..

What will happen is that Paul and I will shift gears. Paul is successfully navigating Public Service Company’s reorganization, keeping his volunteer instincts alive with Optimists. I am in graduate school working on a Master’s Degree in Social Work while continuing to lecture around the country and in Canada on how to “Parent with Pizazz”. Neither of us has to worry about what to do next.

Our plates are full – full of life, full of love, full of joy, full of sorrow, full of all that it means to live in the presence of the Christ child. As for the future…

It is not over, this birthing.
There are always new skies into which God can throw stars.
When we begin to think
that we can predict the Advent of God
that we can box the Christ into a stable in Bethlehem
that’s just the time that God will be born
in a place we can’t imagine and won’t believe.
Those who wait for God watch with their hearts and not their eyes,
listening, always listening,
for angel words.

Joy to the World. The Lord is come!