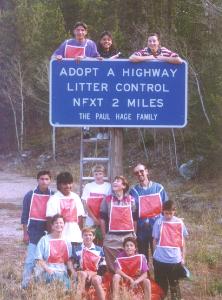 In the Sacred Year of our Lord and Eight Teenagers

The rollercoaster of life has filled the year with heights and depths. Rebecca crowned her high school career by being valedictorian. The same weekend kept us at a peak when James, Rachel, Robert and Ruben were all confirmed into the Lutheran church and the church universal. On the down side, we have had to commit Jesse to a psychiatric hospital due to his out- of-control rage and escalating violence. And so it goes, tears carve a cup for joy to fill.

Rebecca (top right) is now at the University of Colorado, a third generation Hage in the School of Engineering, and finding dorm life less crowded than home. Sharing a bathroom with 24 other girls is easier than sharing it with Rachel.

Jonathan (behind Deborah) will graduate this spring as a flutist and volleyball player par excellence. He is still unsure of where he will be next year. Fortunately his decision making is good so, “Not to worry”.

Matthew (center, back row), at 16, is still entering LEGOS creations in the county fair and winning blue ribbons for their complexity and originality. He is busing tables at Copper Mountain to save enough to go to St. Petersburg, Russia to visit a friend. $1000 – that’s a lot of dirty dishes.

Ruben (left, back row) took honors as a 9th grader playing varsity soccer. He hopes to make a career of it. Which is good as his school schedule is very light on academics and very high on P.E., art and woodshop.

We are back on the probation circuit, thanks to Robert (top, left) and an alcoholic binge. He passed out after inhaling an illegally gotten bottle of tequila and had to be taken to the hospital. He attacked the nurse but she said he wasn’t as unconscious as he appeared as all he was grabbing was her breasts! Fortunately, the work of paying off a $1000 fine and waiting out a year of probation has sobered him up. He’s busing tables at Copper Mountain. $1000 – that’s a lot of dirty dishes.

James (next to Paul) has a new career – in the theatre. His new love is theatre tech and the stage. He helped with sets and was in the school musical and was enthralled. What we used to call “lying” has turned into “acting”! He continues to ski and this year borrowed money from us to purchase all new racing equipment. He buses tables at The Village Inn. $1000 – that’s a lot of dirty dishes.

Small, but mighty, Rachel (top, middle), our fourth 9th grader, was the only girl on the junior varsity soccer team. Her idea of a great time is visiting Rebecca at C.U. Rachel figures that since Rebecca and her friends are also freshmen they all have a lot in common. She hopes to visit Peru and so worked (you guessed it, busing tables) until she had $1000 saved. She’s ahead on the money, the boys are behind. Is anyone surprised?

Jesse (in front of Paul), is still, well, Jesse. Always unpredictable, his current instability has left him unable to cope with the world as it really exists. The current prognosis is unknown.

Our soccer fanatic family has raised a swimmer! Amber (sitting, front) spends 2 hours every day at the pool and is a source of hope for her coach who sees great potential in her. Even if she never comes in first, however, she is a winner, because her increased strength leaves her a much less attractive target for her brothers’ teasing!

Corey (next to Deborah) has had an excellent year and a half with us and with mixed feelings we will send him home to Illinois in March. I am always amazed at the progress a child can make once he or she sets his mind to it. It is hard for me to believe that he came to us out of a psychiatric hospital, with his behavior totally out of control, and now he is in a regular 5th grade classroom, in a regular school, doing regular chores and living almost a regular life. It grieves me doubly that we could not do for Jesse what we were able to do for Corey.

Didn’t go far afield this year as our old car, the van (behind us, out of sight), has 170,000 miles on it and our “new” car, the stationwagon, has 130,000. Our vacation was quietly spent in southern Utah – our favorite place on earth. Nothing compares to Capital Reef and Zion for that balance of exquisite beauty and recreational opportunities. On our way home we stopped by the north rim of the Grand Canyon and the kids, saying that they had already seen it, refused to get out of the car to even look over the edge! Teenagers!

Later in the summer Rachel, Matt and I spent 10 days in Canada, lecturing and touring. Matt and I could not get enough of Ottawa and Quebec. Rachel was put off by the foreign feel and would not leave the hotel. And she wants to go to Peru?

Paul’s and my conversations sometimes are more like business meetings than spousal discussions. Paul, as chairman of the board, remains cool and rational, all those things you expect of an engineer. Meanwhile, the base plant, under the direction of an emotional operations manager, varies from chaotic to merely turbulent. He simply sighs and reads his paper, waiting for the next 5 years to be over. I pop chocolate!

“When love beckons to you, follow him, Though his ways are hard and steep.” Kahlil Gibran

Love has not only beckoned us, but has us in a stranglehold! Fortunately we are not trying to break free. Hope the love in your life has an equally firm grip so you can say with St. Paul, “For I am persuaded that neither death, nor life, nor angels, nor principalities, nor things present, nor things to come, nor powers, nor height, nor depth, nor anything else in all creation, will be able to separate us from the love of God in Christ Jesus our Lord.”

This is the message of Christmas, that Christ comes and brings us a love that can never be defeated.