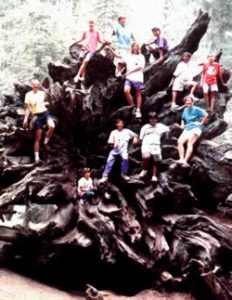 Our big vacation this year was a shock to the kid’s (and my) system. Instead of the usual wilderness experience we decided on an urban adventure. You can’t get more urban than Los Angeles so off we trucked to California, stopping on the way in Las Vegas, the sensory overload capital of the world. I was ready to leave after midnight of the first day when it was still 105 degrees. However, the kids couldn’t get enough of neon glazed eyeballs and the noise of money dropping so we stayed for two days before heading to Sequoia, where we took the picture. (For those of you who are interested, at the top of the three root are Matthew, James, and Ruben. In the middle are Rebecca, Rachel, and Jesse. Across the bottom are Paul, Amber, Robert, Jon and me.)

After a three day respite it was down the mountain to LA and Doheny Beach. Sunny California, we decided, is a figment of some adan’s imagination. For the most part it was a crowded, damp and grey experience. Being from 9000′, where 75 degrees is a hot summer day, we wanted to burn, so we headed south until we found sunshine. We got as far as Ensenada, Mexico before we realized we were chasing a myth. High surf, warm water, and hot sun do not exist, as a combination. What a bubble to burst in our psyches!

The house metamorphosed again this year – both physically and bodily. The garage now has three bays and the new asphalt driveway looks large enough to land a plane. We call it Stapleton International West. In the body department, Erica left and Corey came. What a switch in temperment.

Erica, our therapeutic foster daughter, is now in residential treatment. She accused us of abuse just one too many times and it was no longer legally safe for us to keep her. She made great strides in her behavior, I miss her and hope she keeps in touch.

In her place we now have Corey. His two year old emotional framework in a ten year old body is from Illinois. He has great parents and we are hoping he has a reunion with them sometime in the next two years.

The kids got Paul a mug this year as a way to make amends for all the time he spends taking care of their judgement errors with bikes, radios, cars, etc. It says, “If it’s not broken take it apart anyway and lose some of the pieces, then it will be.” The fix-it-man of the year has just spent 5 minutes putting duct tape around his mittens so that he can go skiing without his fingers poking through. Watching him presented a perfect example of our parent-child values contrast. James and Matthew didn’t like their ski gloves and so went out and bought new ones …..for $45 each.

I am now 42 and everything I do and/or attempt to do is colored by the fact that I am not as young as I used to be. Being 42 is nothing, so I think it’s the 10 kids that has aged me. I have a hope that when I am 50, and Amber graduates, I will begin to get younger and younger again until I am as young as some of you are at 70.

Rebecca is a normal adolescent. She called a boy’s home (we though she was at a girl friend’s) at midnight to asks if she could spend the night, “His parent’s are home, so its ok, Mom.” Come again? We laugh and forgive her anything because she is so responsible, first in her class and was just named Rotary Student of the Month. She is off to C.U. in the fall, but with her work and school schedule, I am already missing her.

Jonathan is content, for the most part, to continue being my personal aide. If I can catch him between flute lessons, practices and performances he will take the other kids to appointments, practices, and lessons and then swing by the grocery store. He got a careless driving ticket and I told the judge, “Suspending his license, Your Honor, won’t punish him. It will punish me!”

Matthew has also entered the working world – busing tables at the restaurant at the top of Copper Mountain ski area. He takes the lift up, works, skis, works and skies down. Tough day! His goal is to buy a computer system for his room; however his outgo is usually a jump ahead of his income.

8th grade Ruben was asked to play J.V. soccer for the high school. Fortunately, that was against the rules. Rebecca and Matt were already on that team and the roster would have looked a little funny. Now he is a starter in basketball. Eligibility for sports is what keeps his brain in gear.

James busses tables at the Village Inn to finance biking gear. He thinks nothing of toodling up Vail Pass or around Dillon Reservoir – before breakfast! Hopefully, Paul will be able to accompany him on the Colorado “Ride the Rockies” bike tour. HE is currently on the ski team and having a great time making sure school interferes little with his life.

Robert has entered a foreign country with his current macho mania. I have no connection to his women-as-things and his look-at-me-wrong-and-I’ll-beat-you-up- posturing. If he were not so big I would wash his mouth out with soap, but that didn’t seem to help when he was six so I suppose it won’t help when he’s 14.

The person who least enjoyed our urban vacation this year was Rachel. Seeing the children in Ensenada peddling trinkets while living in dirt and poverty brought “That could have been me” nightmares. In school, however, the nightmares flee and she is on top of the world. Since the kids have to have a B average in order to get a driver’s license, the betting is that she will have her license before her older, less studious brothers.

This year’s trophy for Most-Improved-Player goes, without a doubt, to Jesse. The anger we thought would consume him has been harnessed to rap music and dancing. He is still a little scattery in the memory-of-where-objects-were-last-seen department, but , hey, losing things no longer means he loses his temper and if that is not progress…

Amber continues to do well. She spends her life trying to second-guess what other people would approve of her doing, saying, being and then does her best to comply. The more she practices the better she gets at it. However, six years after her adoption, I am still waiting for the real Amber to emerge.

I also wait for the peace and love of God as it emerges each day in each of us. So, blessings to each of you in this season, this season in which God proclaims, “Behold, I create new heavens and a new earth.” Allow for the creative force of God to work in you this coming year, and help you to not only promote love, but to also strive against injustice.