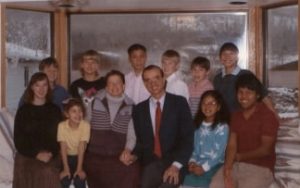 Dear One and All,

This year of Our Lord 1989 has been marked by additions as we added big-time to our house and to our family. Our little tract home is now not so little and is customized with 900 sq. ft, consisting of two bedrooms and a bathroom in the basement and a 16 x 32 foot kitchen-dining room on the main level. We finally have room to put in a decent size table, which we have been told resembles the flight deck of an aircraft carrier. The extra bedrooms means we no longer have to stack the boys 5 deep in one room. Matthew lucked out in getting the old bedroom, with the agreement that we put the king-sized bed in there and in the presence of guests he gets to remove himself hence. Having all this room in which to spread out doesn’t eliminate the boys need to wrestle. Naturally the room they choose is Matthew’s. I can only say to company, “It used to be a firm mattress!”

The family addition is in the form of Erica. She has come to us from Ft. Worth, Texas, an 11 1/2 year old bundle of anger. Unfortunately, she has spend the last years being angry at the wrong people – her loving, adoptive parents. She is living with us, undergoing attachment therapy, and learning to be a lovable little girl so she can return home.

Rebecca continues to be the glue that holds this crazy family together. When dealing with the other children she is so much like me in her manner and tone of voice that it is laughable at times. There is nothing like having a recording of yourself around to help you make changes in your own life. A member of the National Honor Society, her big plan for ’90 is to return to Space Camp.

Jonathan continues his passion for the flute, but doesn’t allow it to interfere with his academics. His maturity, after all those years that his teacher and parents worried about him, is gratifying. Which is good news because he gets his driver’s license in August.

Matthew, on the other hand, is struggling with his maturity and has rejected growing up and accepting responsibility in favor of Legos and WWII plane books. Who can blame him? Adulthood comes soon enough.

Ruben finds 6th grade to be a great challenge, but one he is equal to. He continues to be industrious both at school and at home while making sure the clothing raids he makes on every closet in the house show his trendy sense of style.

If we had a “Most Improved Player” award it would surely go to James! He was home schooled last year due to his poor use of school time and then had a serious run-in with the police this summer which caused him to be placed under court ordered probation. However, sometime since August his head made a discernable ‘click’ and he is now an above-average 6th grade student in the public school, excelling on the clarinet and determined to prove himself trustworthy.

Robert is hanging in there with his 6th grade teachers, though we firmly believe that the only thing that puts him on the bus every morning is the weight room! The odd thing we have learned about pumping iron is that no matter how much weight you can lift one is still not strong enough to carry groceries or move furniture. However, it does fit you for being the best hugger in the house.

Our fourth sixth grader is Rachel. She has taken great advantage of the new school to meet new kids and make new friends. Naturally, when it came time to pick and instrument, the shortest kid in the band had to insist on the trombone! It has been great for her upper body strength though, for unless she heads it straight out she jams it into the floor.

Jesse, is, well, Jesse. You have to spend a great deal of time with him to get accustomed to his rapid mood switches from puppy love to unbridled anger, from cuddle to pit bull in the blink of an eye. Fortunately he has an exceptional teacher, Dan Bennett, that is up to the challenge. Though I imagine even he is saying, “Seven Hages in a row! When do I get a rest?”

Not yet, Dan, not yet! There is still Amber. One more Hage to go. At school she is the easiest Hage to get along with, but the price she has paid for that is the subversion of her true feelings and a total inability to ask questions or admit mistakes. Fortunately, she is very bright and will be able to figure this out, hopefully before too long.

Paul continues to pick up his paycheck at Public Service Company, though, in reality, it seems he works for the Optimist Club and church. For Christmas we gave most of the children season ski passes, so the other critical element of his job is taking them skiing. It is a dirty job, but some one has to do it!

After two years I have resigned my position as Parish Associate at Lord of the Mountains. I want to devote more time to my ‘Parenting with Pizazz’ lecture and tape series. Additionally, I am needed at home, not to cook or clean (heaven forbid), but to be available to the schools as an added resource when one of the kids decides to make a particularly poor choice. As was the case recently when on of our beloveds, instead of humbly listening to the principal after caught in a misdemeanor, chose to cuss her out instead!

With this and more to bring joy to our lives, we take this time to reach out to yours.

“If you pour yourself out for the hungry and satisfy the desire of the afflicted, then shall your light rise in the darkness and your gloom be as the noonday….Arise, shine; for your light has come, and the glory of the Lord has risen upon you.” Isaiah

Christ, our light, has come. May He shine through your life throughout 1990 and the years to come.