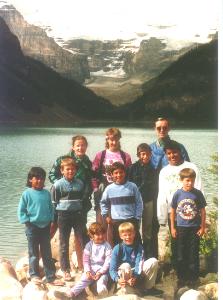 Seasons Greetings to All of You,

The Hage family on vacation, 1987Every night Paul and I happen to fall into bed at the same time we give laughing thanks to each other for another uneventful day and a quiet evening at home. Someday we will be able to say it with a straight face.

The year stands out as a series of wonderful days, interspersed with unspeakable ones. However, even the ones during which I thought Hell would be preferable had their light, redeeming moments. None of them are coming to mind right now, but I know even the worst days had comic relief. And the best days were by far the best days any family could ever have anywhere, anytime.

We hiked in Canada, swam in Flathead Lake outside of Glacier National Park, were extras in a Paramount Picture (War Party) being filmed in a small town in Montana, witnessed the largest teepee encampment and Crow PowWow in South Dakota, climbed to the top of several of Colorado’s over 14,000′ peaks, camped, fished, saw lots of plays, played lots of soccer, and in general, kept busy.

Our big trip was to Glacier, in Montana, next to the Canadian border, and then up to Lake Louise near Banff, where the picture was taken. It was a great deal of driving and though it was fun for the kids to leave the country, in future years we will probably stay closer to home. I am sure after this trip Paul will be able to drive through a war zone with steady hands and unswerving eyes dedicated to the road ahead. The main entertainment en route was provided by 500 skinny, twistable balloons. We made cats, lots of cats, mice, ducks, tulips, and other creatures for hours on end. Paul had to have nerves of steel to handle the scritch/scratch/screech of balloons being twisted and the intermittent bangs when they popped. Whenever we opened the door to the van the brightly colored shapes would flow out and over the landscape. Despite the mess and commotion, the noise of the balloons was far preferable to “He’s looking out my window!” and “See this line I’m drawing across the seat? Don’t cross it!” to the accompaniment of flesh thumping flesh.

Rebecca proved her staying power by being on the Volleyball team without breaking a single nail and for being the only 8th grader to maintain a 4.0. Jon rose to new social heights when he ran for and won election to the Student Council. Matthew has decided to sing his way into heaven with a lead in the school Christmas program. He has made it clear he will not sing in my choir anymore unless he is given solos, lots of them. Ruben is cooking his way into heaven and is always ready to lend a hand whenever food is involved. Robert is champion strong man and can be found lifting bricks for weights and chinning himself from the bar in his doorway. His most recent feat is climbing the rope in in the gym at school from the floor to the ceiling without using his feet or legs.

Jamie has decided his niche in life is art and spend a great deal of time drawing. he definitely is right-brained. Rachel is a bundle of good cheer tied up with an impish grin. In the school Christmas program she won everyone’s heart as Mrs. Santa. Jesse is still searching for an identity. He can’t decide whether he wants to be loveable or consumed with anger. Amber soaks up attention like a sponge but is learning to be independent and has found that reading is the key to entertaining oneself.

The children are all getting bigger and we have become aware of a new phenomenon. As the kid’s legs get longer they stretch further into the middle of the living room and the whole house seems to be shrinking as they lengthen. The same is true for the dinner table. When the shoulders were narrower than the backs of the chairs even the wiggliest kid had squirming room. Now Jon can move and everyone’s milk spills in succession as the shock waves travel around the table.

Yet, the perception of being crowded seems to be almost exclusively Paul’s and mine because when we were recently asked to take a little girl in therapeutic foster placement the majority of the kids thought it was a great idea. After all, there is still an empty seat in the car! Don’t worry the seat is still empty! (Our family therapist actually thinks living here can be therapeutic! Though she was quick to point out it is only therapeutic for severely disturbed kids. I wonder what that says of those of us who live here permanently?)

Speaking of empty, we are not having any company for Christmas and so several people have lamented to us they are sorry we will be alone this year. Eleven of us in the house and friends are concerned we will be alone!?! Here’s wishing you also will be surrounded by family and friends and that your life is filled with love that extends beyond yourself.

You can give without loving, but as Christ grows up to demonstrate, you cannot love without giving. Keep a love that gives in your heart this year.
Love
Paul & Deborah

P.S. If you are passing through, stop by. I think we have one of the most beautiful Christmas trees we have ever had. Since the middle of November the kids have been folding cranes, iris, roses, stars, rabbits, peacocks, balls, chicks, etc, out of foil and beautiful paper. When Jesse was home sick this week he made long strings of paper garlands. All we have on the tree is the lights and the origami. A labor of love, it is wonderful to see!