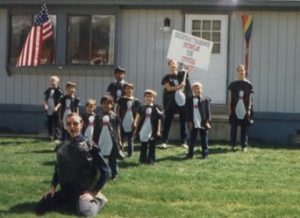 Despite Ann Landers’ and Abby’s views, Paul and I have decided there is no higher literary art form than the traditional Christmas letter. We would consider the season incomplete if it passed by without our having contributed to this great body of literature.

So, with your indulgence, we herewith present to you:

Since our last communiqué in February we have fixed the toilets so they no longer overflow and have scheduled showers, baths, dishwashing and laundry in such a way that the hot water holds out. That sometimes means starting a load of jeans at 11 p.m. or beginning baths for Sunday at noon on Saturday but that is the price we pay for cleanliness. It is also good to be able to report that Paul pulled through at the last minute with a Silverthorne Saturday Parade idea that kept the Best Overall Entry Trophy in the family. We went as 10 bowling pins and a bowling ball with the slogan, “Silverthorne Bowls Us Over”. Every so often along the parade route we would set up in formation and Paul, in his bowling ball costume made from a black garbage bag stuffed with newspapers, would careen down and ‘knock’ us all over. Unfortunately he got a little carried away at one point and careened into a ditch and broke his glasses. After a series of successful spares and strikes I guess he decided it was time for a gutter ball.

Easter was spent in Alamosa with Paul’s parents and after an inauspicious start we had a great time. Within 5 minutes, note that – 5 minutes, of the time we got out of the car, a soccer ball landed at our feet. We were standing in the living room at the time. Leaving Werth, the children’s grandfather, to clean up the broken glass, we decided it was time to check into the nearest Holiday Inn.

Other highlights of the year include a 2 week trip to Wisconsin for Clark (my father) and Mathwick (my mother) reunions. It was wonderful seeing everyone and the drive out and back was leisurely and relaxing. We stopped all along the way and on the return spent 2 days in the Badlands of South Dakota, which are not bad at all but a great place for day hiking and camping. We then stayed 3 days in the Black Hills around Mt. Rushmore. I am sure the Park Service felt that perhaps 3 days was too long as in the cave featured in the Christmas picture, Jamie pulled the stunt of the year. Try to imagine 30 people, with varying degrees of claustrophobia, on a tour 3 miles underground in a narrow cavern on a slippery walk. Jamie, with his hands everywhere but in his pockets, reached behind a rock and finding something hard and familiar, hit it. It was the lights! Having no concept of cause and effect, he could not figure out why everyone was upset with him just because the lights went out.

August found us in Capitol Reef, a favorite camping and hiking spot in southern Utah. Rachel produced the quote of the year there. We had set up camp when the site next to us was filled with a similarly sized Mormon family. The children were stair steps in size with identical blond hair, blue eyes and slim build. Rachel slowly walked past their campsite and trying not to be rude, walked back, staring the whole time. She finally came up to me and asked, “Mom, where do you go to get kids who all look alike?”

Thanksgiving we went to Salt Lake City to visit Paul’s sister, Marilyn, and her new baby, adopted from India in August, and Marilyn’s friend Deborah with her little girl, also adopted from India. Visiting with us were Paul’s sister, Judy, and her new husband, Bruce. Rachel pulled another zinger out of the bag when she asked Judy and Bruce when they were going to adopt a baby. Judy stammered something out about maybe having a baby instead and Rachel walked away confused. Sex education cannot start any too soon for her.

Again, we stayed in a Holiday Inn and I think they should hire us to do their advertising. It is the most wonderful, reasonably priced spot for a family to stay on earth, except home, of course. Try to imagine 11 people, 3 nights, 2 rooms, swimming, hot tub, ping pong and indoor miniature golf for $150! The kids thought they had died and gone to heaven. They were sure of it when they discovered that they didn’t even have to make their beds!

With a wonderful year behind us we look forward to the future and getting ideas from all of you for next September’s Silverthorne Saturday Parade. We have one suggestion in the hopper so far, from Paul’s 2nd cousin in Denver, Carol Joseffy. She envisions us dressed up as a long Chinese dragon. Maybe we could add the slogan ‘There’s no drag in’ around in Silverthorne’. Keep those cards and letters coming and if you have any spare pair of mittens, send them. We still can’t keep up with Jesse’s ability to lose them.

Keep your eyes on the Christ child. He doesn’t stay in the manger but grows up, showering love on all who come in contact with him.